How We Ride Bicycles (Special Event for Tour of California) 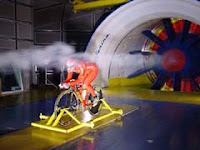 During the 10 day time frame that Lake Tahoe will host the first two stages of the Amgen Tour of California, Mont Hubbard will do a special presentation on the mechanics of bicycling. Mont Hubbard received his M.S. in Mechanical Engineering from MIT in 1965. In 1975, he completed a Ph.D. in Aeronautics and Astronautics from Stanford, and began his prolific career at the Department of Mechanical and Aerospace Engineering at UC Davis. He currently directs the Sports Biomechanics Laboratory at UC Davis, which includes many researchers who have studied the physics behind numerous sports activities, from Frisbees in flight to horses on the track.

Mont Hubbard has extensively researched and written on the mechanics of sports. For this special engagement before the Amgen Tour of California, Hubbard will present two research projects involving bicycles currently underway at the UC Davis Sports Biomechanics Laboratory. The first project addresses fundamental questions of balance and rider control. Using special bicycles that have been augmented with scientific instruments and techniques previously used in Aeronautics, researchers at UC Davis are studying how human “pilots” intuitively control bicycles.

Hubbard will also explain how mathematical models of bicycle dynamics and human energetic capabilities can be used to understand optimal cycling strategies for minimum time trial performance. These models introduce many variables, such as wind, elevation changes,
and rolling resistance, which professional riders must contend with during the Amgen Tour of California. With the scientific understanding of the mechanics of the bicycle and the limits of the human body, it becomes possible to calculate the “best” way to budget one’s energy during a race.

Promote Your Page Too